NEW PROJECT There is nothing irrelevant to the new digital initiative that Tinderhøj School has installed in all 180 taps. In fact, the initiative is the first of its kind in Denmark and in addition to operating savings, the system has a learning screen in the school’s reception that affirms and enhances the schools Green credentials.

The drinking water in the hall has been used 28 times in the past 24 hours, ”says adviser at FM Mattsson Claus Dennis with great enthusiasm in his voice as he finds data on a touch screen that shows that the drinking water temperature is just below five degrees.

“With the new system, all the water habits are basically monitored and it can provide some interesting data that the school can use for several different things. At the same time, the school can get leak alarms, keep track of water consumption and make hygiene rinses that protect against stagnant water,

Tinderhøj School is the first school in Denmark where intelligent electronic capability in all the taps that ‘gossip’ about the consumption pattern. The system is called WMS (Water Management System) and has cost around 400,000 kroner.

The measure is part of Rødovre Municipality’s energy renovation initiative, which aims to reduce the total CO 2 consumption by two percent annually.

How We Use the Data in the Classroom 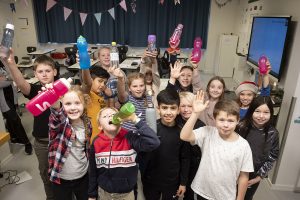 , which will optimize the operation of the green profile school and at the same time allow exciting projects with the students.

“Of course there are good operating savings, but for us it is interesting not that the taps have been replaced, but how we can incorporate all the knowledge that is now available in the teaching. Our new water-saving project fits us well as a green school and also fits in well with Rødovre Municipality’s initiative with the subject ‘Technology and Innovation’, which is now on the school schedule, ”says Lars Rye Vadmand.

How the wet data numbers can actually be used in educational contexts in the classroom, the school’s staff, in collaboration with the students, must find out. Meanwhile, the school’s staff continue to work with the new system and keep an eye on the individual units and adjust the temperature and water pressure as needed.

“We can see exactly how long a washbasin is used in a given class and if the washbasin is not used very long at a time, there could be more focus on hygiene in the class,” says Engin Aköner, who is an energy technologist in the municipality of Rødovre.

He says that the new water system may in the long term help prevent legionella, which this summer closed the water at a large number of the city’s schools. 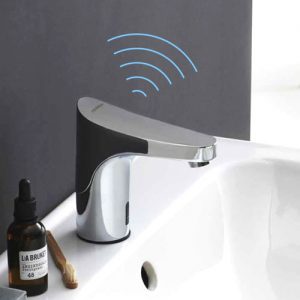 “When we can keep an eye on the temperature at all times, we can prevent water from entering the pipes and reaching a temperature where the legionella bacterium has optimal growth conditions. With the new system, we have therefore set the showers to make a ‘legionella rinse’ every morning at seven, where the showers are flushed for two minutes, ”explains Engin Aköner about one of the other side benefits of the possibility of monitoring the school’s water.