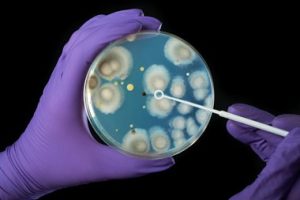 Pseudomonas Aeruginosa poses a growing threat in healthcare applications because of its astonishing capacity for developing resistance to nearly all available antibiotics. This is due to the selection of mutations in its chromosomal genes and from its increasing ability to transfer resistance. Because of Psedomonas. aeruginosa’s incredible ability to dodge antibiotics, it has become ever more important to control Pseudomonas. aeruginosa in hospitals’ environments, particularly water supplies, to avoid infection of patients which it is currently believed to be responsible for as much as 10% of hospital-acquired infections.

In April 2017, the UK government extended the surveillance of bacteraemias (blood infection by bacteria) caused by Gram-negative organisms to include Pseudomonas. aeruginosa which shows how serious infection by this microorganism has become. The intention of the government is to reduce Gram-negative bacterial infections by 50% by 2021.

Pseudomonas. aeruginosa is usually found in biofilms formed in pipes, taps, showerheads, and dead-end pipes. Its presence is particularly evident within the last two meters before the point of discharge such as devices fitted to the supply outlet, for example, taps, mixing valves, showerheads, and hoses.

One of the most effective ways of controlling Pseudomonas. aeruginosa is to target these most likely areas and negate the environmental conditions which encourage its proliferation. This can be achieved by cleaning  & descaling of these areas of possible contamination in taps and showers.  This in combination with regular flushing, at least daily,  (DH Estates and Facilities Division, HTMo4-01 2016) and with regular thermal flushing has proved very successful in reducing biofilm and subsequent bacterial load.

Required daily flushing and regular thermal flushing is normally time-consuming and a huge drain on resources and manpower.

To overcome this, cut costs, manpower and bacterial load Challis Ag+ have developed our unique and innovative wireless Water Mangement System (WMS) which is based on a wireless, cloud-based internet portal which enables reporting and wirelss control of taps and shower mixers across the entire estate at the click of a mouse.  Imagine being able to duty flush all your showers and tap outlets across your entire estate with one keystroke from your office PC Watch our new video below

The Future Has Arrived and is Available Now Challis Ag+ WMS

Or why not visit our web site